It is said that the combat against the evil existence of werewolves can be won by this mythical plant and its flower commonly known as Wolf’s-bane. This plant belongs to the family Aconitum which includes more than 250 species within it. The scientific name of the Wolf’s-bane plant is Aconitum napellus.

It does not only fight with these amazing creatures but also has other dark powers and many other secrets in it. These poisonous species are majorly found in mountains, Northern areas of America, Asia, and Europe.

This is a poisonous plant for both animals and humans. In the myths, it is said that the extracts from its flowers help to weaken the vampires and werewolves. The small quantity of the extract can prove deadly. It disturbs the gastrointestinal system especially, it upsets the stomach; causing nausea, vomiting, diarrhea, and unconsciousness.

It rapidly decreases the heart rate which is the main reason for death in humans. Death is certain in 4 to 6 hours; if a large dosage (more than 20 ml) is taken. It causes burns and allergic irritations if one touches the flowers with an open wound on the skin[1]Pullela, R., et al., A case of fatal aconitine poisoning by Monkshood ingestion. Journal of forensic sciences, 2008. 53(2): p. 491-494. Read.

Aconitum napellus got many common names; devils helmet, monkshood, queen of poisons, blue rocket, mouse-bane, and some people called it leopard’s bane as well. Some of the species and their hybrids are used as ornamental plants and have won gardening awards for this.

It has leaves with stipules (an outgrowth of leave at its base) and its edges may be smooth or irregular (palmate). Compound leaves are there up to 5 and 7. Leaves are attached to the stem with petioles. This petiole helps a leaflet to twist in the direction getting more sunlight.

The one specification in flower morphology is its one-sided hood structure. 2 to 10 petals are there covering the stems and nectaries (colorful part of stems acting as an attractant for insects helping in pollination). Two out of ten petals are large and curved and arranged in such a way to form a hood supported by a stalk.

The main stem is erected and the fruit is called a follicle having multiple seeds when dried; formed of the carpel. Usually, blue and purple colors are seen in flowers. Some of the species have also shown creamy and whitish flowers ranging from light yellow to grayish colors.

Green, orange, and black flowers are not seen in the Aconitum species. Some of the hybrids are designed for producing bi-colored flowers[2]Kuchenreuther, M.A., The natural history of Aconitum noveboracense Gray (northern monkshood), a federally threatened species. Journal of the Iowa Academy of Science: JIAS, 1996. 103(3-4): p. 57-62. … Continue reading.

The major cultivars of Wolfsbane

According to researchers, there are a further 9 sub-species recognized in Aconitum Napellus. It is equally poisonous to eat and to touch with open wounds. The compound leaves are groups of 5 to 7 leaflets. It is native to mountains and its height is just 5 to 10 inches. Flowers are of dark blue to purple shades.

This is also herbaceous perennial plant species, native to Asia and Europe. The color of flowers varies from pale whitish and yellow to violet shade. The overall height is almost one meter, although, the flowers are small. This species is also as poisonous as Aconitum Napellus.

The common name is Carmichael’s Monkshood. This sub-species or cultivar is usually native to China, Russia, and other East Asian countries. Every part of this species is so toxic that can easily cause death if ingested in small quantities, whether it is root, stem, leaves, or flowers. Flowers are of blue color.

The common name is Yellow Wolfsbane. This has a yellow to pale cream color for its flowers. This plant species is native to Asian and European countries especially their mountains and temperate regions are suitable for its growth.

Where all other species are poisonous enough to cause the death of consumers, Aconitum Anthora has the privilege of being used as an antidote against poisons of its relative species. The plant extracts, alkaloids, have been used in herbal medicines to cure many pathological conditions of the respiratory tract. It is efficient in the cure of pains as well.

The species Aconitum Columbianum is commonly known as Western Monkshood. It is a native of coniferous forests, moist and damped places of America. Flowers are wrinkled and folded; leaves are also folded and lobed while the stem is erect. Flowers are blue to purple in colors. These can grow on higher altitudes and are rather cold-loving[3]Kobayashi, T., et al., A new cultivar’Tonemurasaki’of Chinese monkshood variety. Bulletin of Gunma Agricultural Technology Center (Japan), 2006. Read.

Other varieties of Wolfsbane

Although Wolfsbane is poisonous and it’s risky to handle but just because is appealing to colorful flowers many gardeners tends to plant it. Colorful flowers seem attractive to the viewers. Some of the varieties of Wolfsbane are used as ornamental plants when carefully handled. These are Albus, Ivorine, Sparks’ variety, Bicolor, Rubellum, Newry blue, and Scepter. These cultivars have white to blue flowers from more to less toxic[4]Diamond, N., The Miao, and poison: interactions on China’s southwest frontier. Ethnology, 1988. 27(1): p. 1-25. Read.

Seeds are sown in the late spring season. Seeds of Wolfsbane possess double dormancy so it might take a long time to have them germinated. One can sow a large number of seeds so that some of them may get germinated after over-passing their dormancy periods.

Proper watering, soil fertilizers, humidity, and sunlight should be provided. It is time taking process. The gardener needs to stay patient. If seeds are sown in the late spring of the year, new plantlets might be seen next summer. Seeds are to be handled carefully because they got poison in them.

In this protocol of asexual propagation, plants are dug out of the soil and healthy roots are cut into many portions. New posts are made ready for planting these roots cuttings in it. Fertilizers are not much required. Healthy roots are selected for plantation in containers.

Roots must be placed in a wet soil mixture of peat, sand, and clay. Again, the provisions of humid soil, nutrients, and sunlight are ensured for healthy plantlets to grow. This plant has the ability to thrive in the majority of weather conditions except for frost and long exposure or sunlight in warm areas[6]Heger, M., J. Whitman, and D. Lonnee, Growing perennials in cold climates. 2011: U of Minnesota Press. Read.

A chemical belonging to Alkaloid compounds named aconitine is said to be responsible for the toxic character of Wolfsbane. This chemical is most concentrated in plants seeds and roots. This has vulnerable effects on the excitation of muscles, especially the heart leading to death.

Aconitine opens the sodium gates and pathways resulting in quick and uncontrolled excitation. It may cause severe paralysis, dangerously low blood pressure cause the heart to stop pumping, and eventually death.

This alkaloid also has some medicinal effects so, was used in Chinese herbal medicines. It relaxes aches and relieves pains as well. The use of gloves should be made mandatory for handling Aconitum Napellus flowers[7]DU, Q., J.-h. PAN, and G.-j. YAN, Determination of Ester-series Alkaloid and Total Alkaloid in Complex Prescription Monkshood Plaster [J]. Lishizhen Medicine and Materia Medica Research, 2008. 1. Read.

As the plant is poisonous, it is resistant to most insect pests. It loves to grow in soil that has a good supply of water; making it prone to many fungal diseases. Important fungal pathological conditions are Verticillium Wilt, Root Rot, Powdery Mildew, and Bacterial Leaf Spot. These plants are also sensitive to frosts. In freezing weather, the gardener does not need to be prone to cutting their deadheads.

Wolfsbane uses in medicines and poisons The Manjula Pothos is a protected pothos cultivar that was created by the University of Florida... The Rattlesnake Plant is a herbaceous lasting evergreen, local to Brazilian rainforests, with... 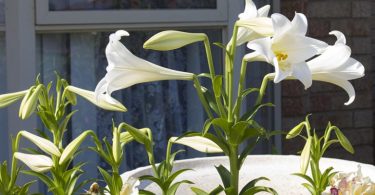 Lilium candidum, the Madonna lily or white lily, is a plant in the genuine lily family. It is local...